Welcome to my new Blog!

I had been writing a blog for quite some time about Remembering Film Institute Days. I used to write about some other personally felt matter too having no connection with the Film Institute. I thought it will be better for readers to read them separately. Hence I am moving those writing into this space.

Hope you will like this!
Given below are some of the Blogs published earlier under Remembering Film Institute days:


Lohi - A Sudden End
The news of the sudden demise of Malayalam Screenwriter and Director A.K. Lohitadas, on Sunday, 28 th of June came as a wild shock to me. I could not believe the news as I was not aware that he was having some heart problems for the past few months. A few months back, I had seen him waving to me from a distance at a function but we could not meet each other and talk.
I had the opportunity to be associated with him as Script writer for RADHA MADHAVAM (1990 - Dir: Suresh Unnithan) AADHARAM (1992 - Dir: George Kithu ), VENKALAM (1993- Dir: Bharathan) and SALLAPAM ( 1996 - Dir: Sunder Daas) and also in his Directorial ventures KARUNYAM (1997)and KANMADHAM (1998).
Unlike other Scriptwriters, he used to be on the sets on a fulltime basis always coming up with suggestions for improving the film. He was a keen observer and by watching various Directors like Bharathan, Siby Malayil and others from close quarters he gained knowledge in the art and craft of Film Direction. Later on when he worked with new directors like George Kithu in AADHARAM and Sundar Daas in SALLAPAM he guided them with his knowledge in Direction by suggesting how a shot should be taken or camera angle to be placed etc. He also did Second unit direction in SALLAPAM which was like a training ground for him in Direction. 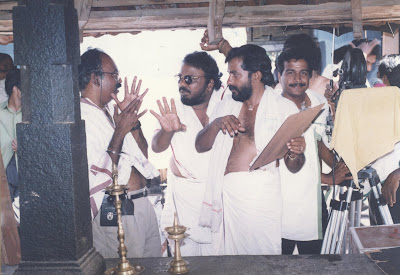 Myself, Lohi and Director Sundar Daas - SALLAPAM
He was a sensitive and sensible human being who hailing from a lower strata of society rose to the heights of glory in Cinema as a Script writer and Director, through sheer hard work and genius. He found themes for his films from the people around him and made them immortal in the horizons of Malayalam Cinema. His first Directorial venture, BHOOTHAKKANADI won many Awards and was appreciated by one and all. The switching on ceremony of the film coincided with the start of Sundar Daas' second film KUDAMATTOM and both the functions were held together at Shoranur Rest House, a favourite haunt of Lohi, where he used pen many of his outstanding scripts. 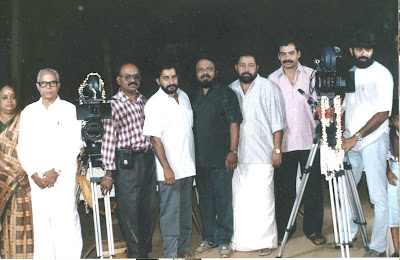 (L-R) Sundar Daas' Parents, myself, Sundar Daas, Lohitadas, Directors Siby Malayil, Sathyan Anthikkad and Venu, Cinematographer
Lohi was a very emotional person and a keen observer of people. He had a knack of grooming new actors and bringing out the best performance out of them. I had occassion to observe this, first hand in the films we were associated together. During the filming of SALLAPAM, Manju Warrier, who was a newcomer at that time had difficulty in enacting a shot in which she had to laugh spontaneously on seeing the character Junior Yesudas (Dileep) with a chisel in hand working as a carpenter. After many takes, the laughing shot did not turn out to be natural. Then Lohi suggested that we take that shot after a few days, so that she will get accustomed to the character she was playing and get used to filming routine as well. A few days later, the shot was sucessfully taken without any hassle and Manju later on became one of the finest actresses of Malayalam films.
Similarly in the film KANMADHAM, Lal (Siddique) was uncertain about his ability as an actor. Though well established as a Director and Scripwriter, he had just done one film as actor in Jayaraj's KALIYATTOM. But as a performer he was finding the role in KANMADHAM a difficult proposition altogether and that too pitted against an actor of calibre such as Mohanlal ! Lal even thought of backing out from the film but for Lohi, who came out with encouraging words and gave him confidence about his acting abilities and brought out excellent performance from him. The Kerala State Award for Best Actor in 2008 won by Lal would not have happened if Lal had stopped acting at that time, and concentrated instead on Writing and Film Direction !
Under Lohi's Direction I did two films KARUNYAM and KANMADHAM. The film KARUNYAM was a moving tale of Father and son relationship very emotionally narrated and filmed. KANMADHAM had a very powerful story shot in the height of summer in Palakkad and completed on a hectic schedule of 55 days on the whole. It was simultaneously shot, dubbed , music scored and sound mixed within that short time frame. Even while the re-recording is going on we were shooting portions of the song sequence. As the script was not complete Lohi was under tremendous pressure as he had to write each day's scenes early in the same morning and proceed with the shooting. The dubbing and editing work was simultaneously done at Chennai under the supervision of Sundar Daas. The film had the rare honour of being the only one for which I left for the shooting and returned home with the print of the film in 55 days flat! Yes, I flew back to Trivandrum with 3 Prints for Trivandrum, Attingal and Kollam theatres. Yet the film was very successful and Manju Warrier's superb perfomance was much appreciated and the film had won me the First Asianet Film Award for Cinematography.
After that film in a private chat, he told me and Producer Kireedom Unni that he will never shoot a film without the full script in hand! But he was never able to keep up his decision. The strain and stress took its toll on his health and ultimately resulted in his untimely death. Malayalam Cinema had lost one of its great script writers, and I, a true friend and a fine humanist par excellence.

May his Soul Rest in Peace and may the Almighty give strength to his wife Sindhu and sons HariKrishnan and Vijay Shankar to bear this great Personal Loss!

Memories from the Past 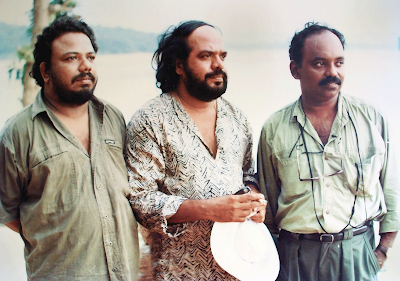 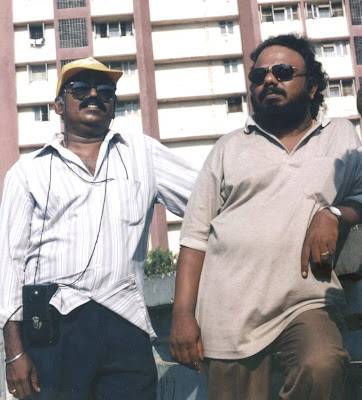 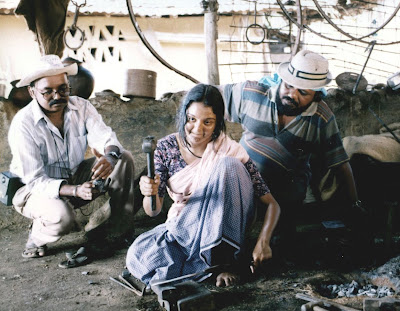 A NIGHTINGALE HAD FLOWN AWAY

Madhavi Kutty, Kamala Das, Kamala Suraiya - noted poet and writer in English and Malayalam passed away into eternity on Sunday, 31 st May. 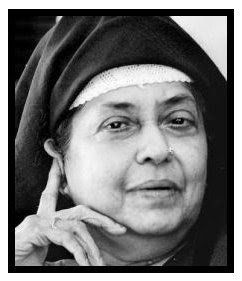 I have read many of her English Poems published in the Seventies and later on when I learned to read Malayalam her novels and short stories in the language in which they were written. When I myself started writing poems in English, I just happened to send a few of them to the YOUTH TIMES Magazine from the Times of India Group, Bombay. I never expected that it would be published. It so happened that I have a lucky streak in getting my works published in the very first attempt itself. The first photo I had sent was published in the Tamil magazine KALKI. My first Letter to the Editor also found a place in THE HINDU Newspaper.
Likewise four of my maiden Poems were Published in the issue of YOUTH TIMES Weekly, 17-24 November, 1977. They were was selected by none other than the great KAMALA DAS, herself who was the Poetry editor at that time ! I also got a note that a few of my other poems were also selected for publication, but I did not hear any further about them. Though I wrote many more poems, these are the only ones which got through in to the print media. To read more of my Poems, please visit https://sites.google.com/site/ramachandrababuk/poems

My Poems in YOUTH TIMES

In the blazing sun I walk blind
My immobile hands follow behind
Time worn planks in the stairs of destiny
Utter a long drawn out cry.

Under a shade less tree, with the ghosts of tomorrow
I await an encounter with fate.
Absolute silence seeps in to the void
Among the transparent shadows of life
Stretching seconds into years and then to ages.
This maddening stillness, this unending agony
Fills me with the suffocating terror of the unseen.
How I wish,
I could just take-off and just vanish
Yeah!
I feel the ground
Suddenly s-l-i-p
UH____


In moments of silence
Words refuse to appear
Defying the laws of language.
Back-fired thoughts shock frozen
Stand as
Dumb T.V. towers in the desert.
Disrupted communication
Speaks in sign language
To those blind eyes staring at infinity.

(Inspired by Kobo Abe's Women of the Dunes )

Under the undulating dunes
Desires lie buried
My soul sleeps imprisoned
Somewhere in a bottomless pit,
To each his own
He himself being one.

Ours might be billion light-years apart
Or just a sand wall away.
Above in the gray sky
Under the blinding sun
Circles a lone vulture.
I dig my agony to unearth lost ecstasy.
In constant work, do I exist
My universe --- this pit.
Destination unknown,
This journey a one-way trip.
Perhaps our tunnels may meet in the sunset
We may then discover
What we have lost
Or what we have not yet.

Of Godmen, Gods And Men

My denial is no conclusive proof of absence
Nor other's approval the evidence of your existence.
They sing of your manifestations,
Many visitations and revelations
Some claim your partial presence in their form
And perform miracles like magicians,
Only garbs are different
Arenas vary.
If at any one at any time
Could feel your presence, even a trifle
It is just possible that
I too might.
Skeptics like me
Can wait till then
Before we start to believe.

During the course of my profession as a Cinematographer I had traveled to many places and happened get in touch with many great Writers and Poets from Kerala. But it so happened that I never met her in real life though I had been in the cities where she had lived for some time. I really miss meeting her in person to thank for selecting my poems for publication and encouraging me.
May Her Soul Rest in Peace
Posted by Ramachandra' Babu at 5:37 PM 2 comments: